Report on the Gender Equality Index 2017 conference, 11 oct in Brussels

The conference provided a forum for around 300 decision-makers and practitioners to discuss the findings of the Gender Equality Index.

A snail pace to gender equality

The Gender Equality Index measures the progress of gender equality in the EU. It is updated every two years, and has six core domains – work, money, knowledge, time, power and health – and two satellite domains: violence against women and intersecting inequalities. The Gender Equality Index points out areas of improvement in all EU Member States and supports policy makers to design more effective gender equality measures, since it shows the gaps between men and women, monitors what is working, what is not, and allows to measure the progression on gender equality.

This third edition includes an intersectional perspective which shows that gender inequalities vary across age, education, family composition and parenthood, country of birth and disabilities.

What we miss on the Index 2017? It is an analysis of the society from a binary (man/women) perspective, a wider more inclusive approach would be necessary, but, so far, according to the speakers at the conference, not feasible due to the lack of comparable data.

What to highlight on the Index 2017? On the one hand, the persistent and increasing inequality in time use, particularly large in unpaid care works. On the other, the most improvement was made in the domain of power, though still very low. 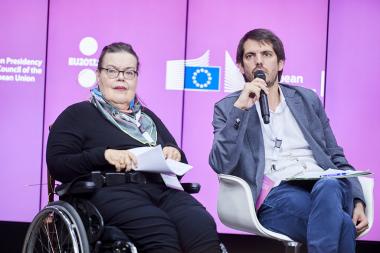 Conferences were inspiring, illuminating. Two speakers to be specially remembered: Joanna Maycock, clear, direct, who openly spoke about women seen as second class citizens; and Pirkko Mahlamäki , who emphasised the lack of visibility of women with disabilities, and insisted in the fact that we can be proud of the history, but absolutely not of the current situation.

As for Luxembourg, it is practically in all areas above the 28EU level, but still far from 100%, except for domains of Money and a Health.

A lot of done, a lot to be done together, with commitment, political willingness and budget.